What did we do before Pinterest? No, seriously. I can tell you what I did. I had several half attempts at an organized "Bookmarks" tab on my internet explorer that I didn't regularly keep up or organize. It was pretty much useless. But now that I have Pinterest to help organize and inspire me I can forget about the old days. I use Pinterest for a lot of things but lately I have been scouring it for fun activities to do with babies and toddles. Now that Kaitlin is crawling, cruising and way more interactive than she was when she was a newborn, I have been trying to come up with new games and activities for us to play. Three hours is a long stretch of time to fill with activities for someone who has an attention span average of five minutes.

While gathering some inspiration around Pinterest I stumbled upon a new-to-me-blog called Fun at Home with Kids. I originally came across this post on their playroom and quickly noticed the sensory boards they have on the walls. I immediately checked out her post on the sensory boards and I was smitten. I knew Kaitlin would love something like that; something she can play with, use to problem solve and help develop her fine motor skills. The only problem was we don't have a place on our walls to mount them. A friend of mine also made the boards but couldn't mount them either and had trouble getting the board to stay upright - after all the purpose of the board is for your baby/toddler to play and pull on the objects. I talked to Brian about it and he had a genius idea - why not turn the board into a table? Such a smart guy! 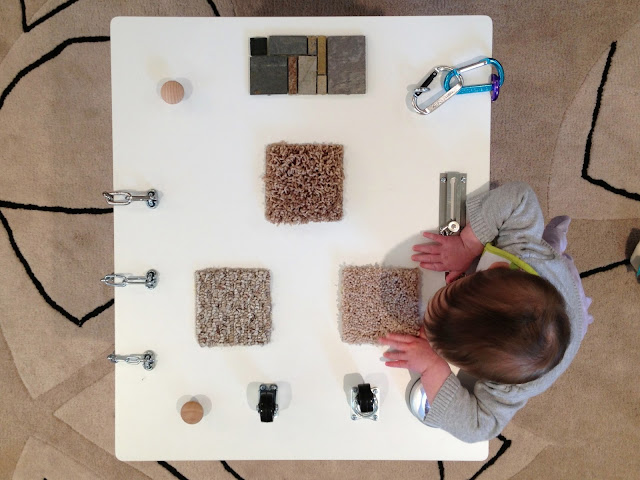 Over the weekend we gathered all the materials for the sensory table. Since we were only going to make one table it was going to be smaller than both sensory boards that were our inspiration. I wouldn't be able to use all of the items that I originally wanted to but I knew we could still make it work.

We decided to get the Kritter table from Ikea in white. Ikea had a few cheaper options but we liked that the Kritter was mostly wood and would be able to withstand having things drilled into it. Really any small wood children's table will do, but remember that you are going to be drilling, hammering and glueing objects onto it so you might not want to spend a lot of money.

The next step was to go to Home Depot and gather our supplies. I was able to use a lot more than I thought we would be able to and modified them if needed in order to be on a table:

After the table was assembled I went to Michaels to get a few more items, which we need to add to the table this weekend:

It took Brian about an hour to assemble the table and to attach everything. What couldn't be screwed in was mounted with Gorilla Glue. We might have to move a couple of things around to make room for the new additions but it shouldn't be too much work (says the girl who doesn't have to do it ;) ) 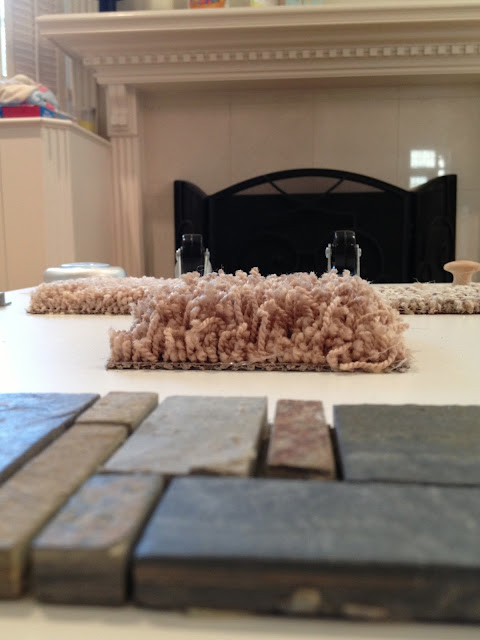 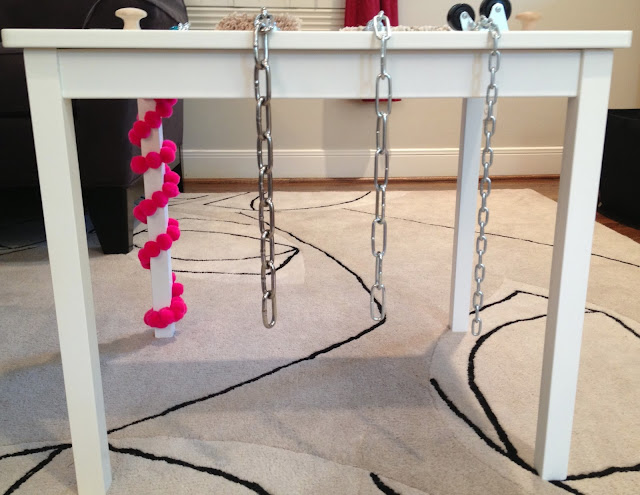 And the verdict from Kaitlin? She loves it! So far her favorite things are the light, the chains and the carpet samples. She would play with that light all day if she could. She can't turn it on by herself yet so we have to do it for her, but her little face lights up as bright as the light does when we turn it on for her. I often "hide" the light under my hand and have her "find" it by lifting my fingers up. The chains have also been great, since she can grab on and bangs them against the side of the table. If you decide to make you own sensory board or table please make sure that the chains aren't long enough to be a strangling problem - safety first, people!

The wheels are decently entertaining, though to rotating one is much more popular than the fixed one. The pom-pom ribbon, for now, is wrapped around one of the legs. Every once in a while Kaitlin touches it but for the most part ignores it. I'm thinking about tying (and then glueing) some ribbon around the wood knobs to make them a little more interesting and to add another texture to the table.

The best thing about the table is that I know it will keep her entertained for a long time as there are so many things on the board that she still has to figure out how to use (lock, turning the light on, spring links, etc). I also love the fact that you can make a sensory table out of almost anything! Once you start gathering objects to put on it I guarantee you'll start thinking of a million different things that you have to have on it. The key is to have enough on there to make it interesting and challenging, but not so many things that it's overwhelming.

Any negatives, you might ask? Well, the table is a bit on the high side. We are considering cutting a couple inches off of the legs so Kaitlin can reach everything better, but honestly thats just us being a little nit-picky (and before we know it she'll be tall enough to reach everything). In the end this little project wasn't exactly cheap. All in all it cost about $75, even though everything was $1-$3 each it starts to add up. The good news is that you might be able to find some interesting/fun things to add to your board/table in your garage or in your craft supplies. We don't have a lot of extra stuff like that laying around so we had to buy it all new. But if you have it you might as well use it - as long as it's safe the sky is the limit! 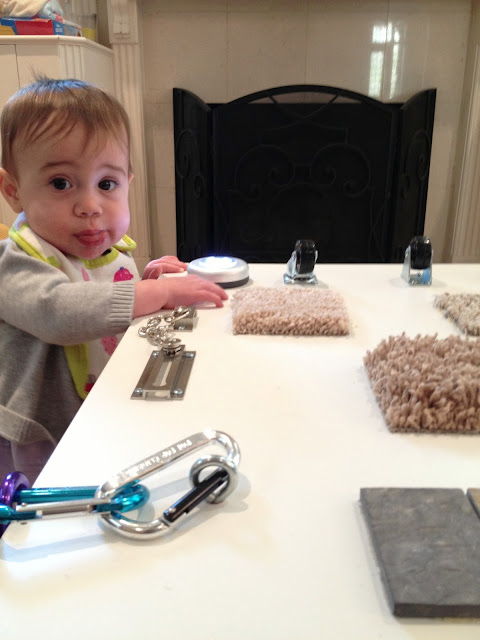